Katy finds family law particularly fulfilling because it allows her to assist clients with difficult, deeply personal issues. As an attorney, she believes it is important to use the training and knowledge that she has earned to help her clients achieve fair and reasonable results in their cases. She also feels strongly that it is our duty as attorneys to provide our clients with realistic expectations about their cases. She always remembers that, for her clients, the case at hand is very important to their lives and those of their children.

Katy was born in Washington, D.C., spent five years in Germany as the daughter of an Army psychiatrist, and then moved to Minnesota for the rest of her childhood. She earned a double major in International Affairs and Foreign Languages from Lewis & Clark College in Portland, Oregon. Although she loved the Pacific Northwest, she could not resist the pull of the mountains and moved to Colorado for graduate school.

While at the University of Denver, Katy focused on obtaining practical knowledge by participating in moot court and interning with a district court judge. She competed in the National Environmental Law Moot Court Competition for three years and the Jessup International Law Moot Court Competition for two years. She also participated in the Environmental Law Clinic for one full year. She was an editor for the Denver Journal of International Law & Policy for three years, serving as Sutton Colloquium Editor and then as Editor-in-Chief. While she was earning her juris doctor, she also earned a masters of arts in international studies from the Josef Korbel School of International Studies.

Katy is fluent in Spanish and French. 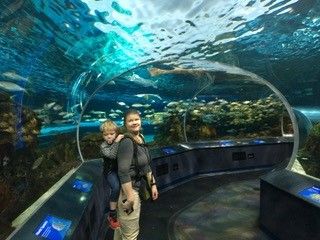 Here are Katy and her son experiencing the Toronto Aquarium.