Meet the Team at Our Evergreen Office

Evergreen is just 30 quick minutes up the hill and is host to one of The Harris Law Firms four locations. Evergreen is a wonderful community that has a full calendar of community events. In the spirit of this weekend's Dam Duck Derby, where thousands of numbered rubber ducks are dropped over the Evergreen Lake Dam and race toward the finish line to benefit several non-profit organizations and the Evergreen Holiday Walk (just another Evergreen event!), we are introducing our Evergreen office in true quackie-style: 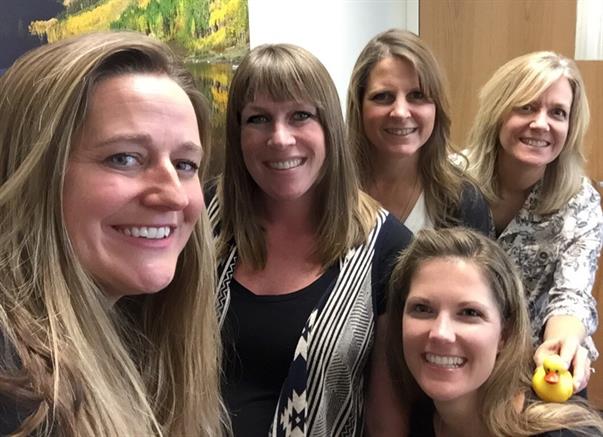 Jennie Wray migrated from Tennessee, to San Francisco, and finally to the New York City area before she and her husband called Evergreen home in 2007. If you know the story of "The Six Little Ducks That I Once Knew,” Jennie is "the duck with the feather in her back, she led the others with a quack-quack-quack;" Jennie, a partner at the firm, has been with the Harris Law Firm since 2008!

Fun feathered fact: Jennie and her husband raise five chickens – all named after female pop stars with a “bok-bok” name twist – in their solar-powered coop.

Carrie Eckstein migrated from Indiana, to Arizona, to Ohio, and finally landed in Colorado in 2006 to start practicing law. Her favorite duck joke is: What do you call a crate of ducks? A box of quackers! She's been with the Harris Law Firm since 2009, and recently moved up to Evergreen. She keeps one wing in the Denver office, but also enjoys the convenience of the fabulous Evergreen office.

Fun feathered fact: Carrie's husband informed her just a few months into dating that he would have a duck in his wedding. Six years later on the big day, a duck walked down the Wash Park boathouse isle!

Kelly Lynch migrated… well the thing about Kelly is that she proves that if dogs have nine lives and ducks have five, then Kelly has had about ten (you do the math). She's from South Carolina, and has been many places, done many things, and met many people – she even gets along with them all! Kelly is about as popular as Daffy Duck, and has rubbed elbows with many famous quack-stars. She has worked at the Harris Law Firm since 2013.

Fun feathered fact: Kelly is currently sitting on an egg and will be a proud Mother Goose any day now!

Jennifer Irwin migrated from the NYC area to Las Vegas before landing in Colorado in 1997. When she isn't playing senior paralegal by day, Jen is either off protecting furry and feathered friends at the popular Evergreen Maxwell Falls or she’s busy sampling her hubby’s fine flavored local brews at the Evergreen Tap and Pond. Jen has been with the Harris Law Firm since 2013.

Fun feathered fact: You would never know it by looking at this spring chicken, but she's had two boys who were born just after Howard the Duck was released.

Maureen McAllister migrated from the lakes of Minnesota and, staying true to migration patterns, went down to Arizona, over to California, to Colorado, back up to Minnesota before finally landing in Colorado again. She's landed right where she wants to stay. She joined the Harris Law Firm about a year ago and is a great member of the flock.

Fun fathered fact: Maureen has seen her two children graduate from Evergreen High School. She will be an empty nester in mid-August when her youngest spreads her wings and starts college!

If this has inspired you to join us at the Dam Duck Derby, you can find information on their website and we will see you there! Or if you'd like to consult with us in our Evergreen office, please call us at (303) 622-5502 to set up an appointment, or you can fill out our online form and let us answer your legal question at no cost to you.